Okay, so. Massive post coming about all the awesome things that happened when rth and I met at SPN Con NJ, but first:

This morning I rolled out of bed at ten, which is when Supernatural reruns begin. There is just something magical about enjoying breakfast while Sam and Dean battle their way through ghosts, guts, and gore. But today, there appeared to be some kind of Closer marathon (ugh) so instead I watched a Season 5 episode from my DVR stash, which luckily is set to season record and still catches the reruns that air on Friday (another ugh, for the timeslot change). I selected The End because there was a lot of talk about it during Rob Benedict's panel. And HOLY OMFG. HOW DID WE NEVER NOTICE THIS.

Dean gets saved from croats when a Humvee cruises up and guys in camouflage and helmets hop out and start shooting up the place. The drinking. The music blasting. HOLY OMFG THIS IS OUR BELOVED TEAM 1 OF PLATOON 2.

GUYS GUYS GUYS --- BRAD AND RAY VERSUS THE CROATOAN APOCALYPSE. AND NATE. AND TROMBLEY. AND RUDY. AND DOC BRYAN. AND OMFG GODFATHER RUNS THE MARINE BASE CAMP VERSION OF CHITAQUA. AND CHUCK AND EVAN ARE BESTEST BUDDIES. AND DEAN HAS TO JUGGLE THEIR BULLSHIT BECAUSE SARAH PALIN IS RUNNING THE SHOW?! WTF THIS IS AWESOME.

WHERE IS THE CROSSOVER FIC FOR THIS. GEN KILL/SPN CROATPOCALYPSE. HOLY SHIT, THIS WOULD BE COMPLETELY OUTRAGEOUSLY EPIC AND I NEED IT RIGHT RIGHT NOOOOOOOOW. 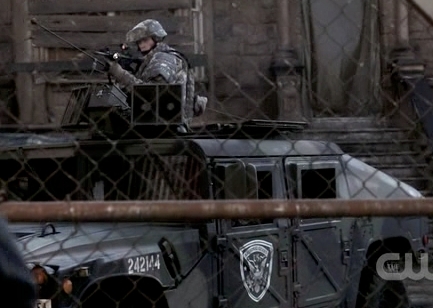 I tried to match the arms on the door, and unfortunately I think it's the Army insignia and not the Marines, but I DON'T CARE. THIS MUST HAPPEN BECAUSE THE LEVEL OF AWESOME WOULD BE OUT OF THIS WORLD.

be_themoon for getting me into Gen Kill in the first place (she was also my very first SPN friend), and

metonomia for feeding my addiction to both. NOW GUYS TELL ME THIS STUFF ALREADY EXISTS BE I WAAAAAAAANT IT. BAAAAAAD.
Collapse