Okay, so finals started last week and I have been CRUNCHING trying to juggle final portfolios, essay writing, Italian verbs, enormously time-gobbling long shifts at my annoying retail job, and all the slides I need to cram down my throat. In short, I have not been sleeping much. But I'm thinking that maybe it's become a problem, because during the Dutch exam, this slide came up and... um, I think I started hallucinating. 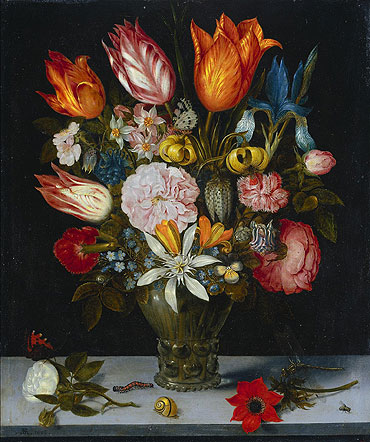 During the test I was supposed to be writing about this, but while I was looking at it and trying to glean out significant details, I started to see a face in the flowers. An angry one. In the middle there, where the two yellow flowers are. And a cat-eye thingy that looks like a nose? And that white lily that could be a puckered mouth, with that weird yellow-orange bud that sort of like an angry upturned cigar? And the leaves of eyebrows that are so disapprovingly intense?

Anyway, I started freaking myself out over the angry face that didn't exist and those yellow flowers were possibly shifting into the eyes of Azazel, and the four minutes we have per slide was ticking away, I had written nothing, and it would have been a REALLY GOOD TIME to pull a peppermint out of my pocket and chill out, but I didn't have one.

I got through the rest of the test okay, but now I am going to nap and hope that when I wake up I can no longer see Angry Azazel. Happy break to those who are done, and if you are still knee-deep, I recommend the Hercules soundtrack for a burst of encouragement. Go the distance baby!
Collapse